If “the earth is the Lord’s” and we are His stewards, then obviously some livelihoods are “right” and some are not. Is there, for instance, any such thing as a Christian strip mine? A Christian atomic bomb? A Christian nuclear power plant or radioactive waste dump? What might be the design of a Christian transportation or sewer system? Does not Christianity imply limitations on the scale of technology, architecture, and land holding? Is it Christian to profit or otherwise benefit from violence? Is there not, in Christian ethics, an implied requirement of practical separation from a destructive or wasteful economy? Do not Christian values require the enactment of a distinction between an organization and a community?

If you think safety and security will be brought about by more guns, then you clearly are missing the point of Jesus’ life and death.

In the days since the tragedy in Orlando, we’ve seen the pro-gun crowd double down on their call for more guns in society, led by presidential candidate Donald Trump, who expressed support for the idea that what when wrong in the Pulse nightclub was that there weren’t enough guns in the building.

For decades, the NRA has led a push on behalf of the gun makers they represent to normalize the idea of a gun in every hand, all in an effort to make more money for the aforementioned companies. They’ve certainly succeeded in polarizing the debate, but more importantly, the gun lobby has managed to completely transform the culture of American society.

The culture of America is now one of fear and distrust of others, and a willingness to commit violence at the slightest provocation. It is a culture that says the way to relate to others is with bluster and anger and hate, in an effort to cover up the infantile fear of so many.

And it’s understandable that fear is the prevailing mood in 21st century America, when an entire ideological movement has paired with the gun lobby to terrorize Americans by making them think that everyone different from them, and everything strange, is a mortal danger. When you constantly hear that you and your family are in danger from terrorists and black teens and trans people and Mexicans and a hundred other things, then of course you are going to be fearful. And if you are fearful – like really, life-and-death fearful – day and night, then of course you are going to listen to the NRA when they tell you that the only thing between you and danger is the barrel of a gun.

And to think, we have the gall in the midst of this to claim the mantle of a “Christian nation.”

Fear and distrust and anger and violence are all the antithesis of the Way of Christ.

The message of Jesus was one of strength through peace. It was a way of power found in love and submissiveness, not force and coercion.

Jesus found a way to deal with enemies: you love them. You serve them. You go the extra mile. You lay down your life, if that’s what it takes.

When Jesus was confronted with violence and his own death, he did not pull a sword and lead an armed resistance. He implored his followers to put away their swords, reminding them that “Those who live by the sword, die by the sword.” He recognized that his nonviolent resistance is what would break the cycle of violence. It would warm the cold hearts of the world, by showing them that real power and liberation is found by refusing to submit to the violent ways of the world.

You turn the cheek. Because, if we are going to live in a less violent world, we have to break the cycle of violence.

More guns and more fear and more distrust will not make us a safer society. Walking through Kroger with your AR-15 does not make anyone feel safer or secure. Putting guns in the hands of more people does not make for less violence. Weapons of war and destruction do not build a more just, peaceful and merciful society. 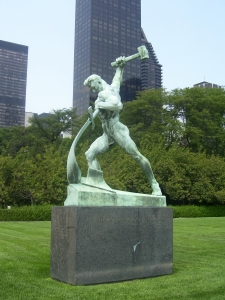 We must beat our swords into plowshares. We must learn to love others. We must begin to be peacemakers.

Does the mean we don’t protect our loved ones and the vulnerable of the world? Does that mean we become doormats for injustice and power to walk all over?

But it does mean we have to re-imagine our conceptions of power. We have to find that prophetic imagination that animated Isaiah and Jesus and Gandhi and King and Mandela. We need to be able to imagine a gun-free world, a world where mutual distrust and cynicism is replaced with love for our brothers and sisters. Only by imagining a new way of being in the world will we begin to transform this world.

Because nothing screams “lack of imagination” like a gun.

The only way we replace the fear that has permeated our culture is through love. It’s biblical: “Perfect love casts out all fear.”

We have to be willing to take our call as Christians seriously, and realize that peace and nonviolence begins with us. We have to be the example, just like Jesus was the example. We have to practice love for all people, especially those we term our enemies. We have the live into the role that Jesus blessed: that of peacemaker, of the meek, of mercy, of the oppressed.

Don’t like the idea of that? Take it up with Jesus.