Yoder argues that the church precedes the world epistemologically, but Coles rightly argues that does not mean that Yoder thinks the church has nothing to learn from the world. Rather it means that there can be no “politics of Jesus” that could be coercive, selfish, nondialogical, or invulnerable. Therefore, Christians, from Yoder’s perspective, should welcome the diversity of peoples that Babel represents because only by engagements with different communities does the church learn what it means to be a community of truth and love.

No one can accuse Hauerwas of any partisanship, or even a affinity for American democracy (this book, after all, is a series of essays by him and Coles imagining a new sort of politics the church can pioneer over and above liberal democracy.) But I think this passage here could be applied quite aptly to the political scene in America right now, and really for the duration of this last election. 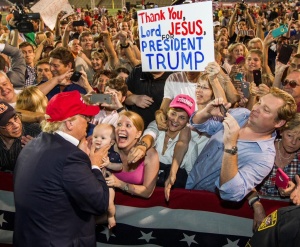 American politics has become quite dependent on what Hauerwas and Coles term the “politics of fear.” Yet, one of the central ideas of Christianity is a “love that drives out all fear,” and consequently, a way of engaging in the world that reject the structures that are dependent on fear for their own continuance. Liberal democracy, in Hauerwas’ view, is such a structure.

That fear has been especially evident this election season, as we saw Donald Trump sweep to power on a platform that largely was driven by fear of almost every “Other” one can imagine. Fear of the Other has become the primary driving factor for white Christians in America in 2016, in direct contradiction to the dictates of the Gospel message, as was made evident by the 81% of white evangelical Christians who provided the key support that delivered Trump the white house.

Indeed, Hauerwas notes here that a Christian politics is one that happily engages with the Other, because only then does the church live fully into it’s inheritance. Rather than being driven fear, Christians are called to be driven by love and self-giving. The politics of Jesus looks like the life of Jesus: compassionate, humble, just, and concerned with the “least of these” first and foremost.

American Christianity is at a point of reckoning. In a monomaniacal focus on culture war issues, most notorious of which has been abortion, the church has ceased to be a reflection of the life and example of Jesus in the world. It has cloistered itself, becoming inward-focused and obsessed with preserving a white nationalist, hyper-moralistic, us-vs-them vision of politics, rather than the life-giving, love-filled Politics of Jesus. In order to “be for the world what the world can become,” as Hauerwas writes, it must reject it’s fealty to white American exceptionalism and regain it’s vision for a future predicated on love for the Other that is all around them.

Tell Me What You Think Cancel reply