I just started reading Bishop John Shelby Spong’s Jesus for the Non-Religious, and this quote from the first chapter really struck me:

Critical Biblical scholarship, having now passed through several generations, forms the frame of reference in which the Christian academy works, dramatically separating the Bible from the assumptions held by the average pew-sitters in our various churches. Yet clergy, trained for the most part in the academy, seem to join a conspiracy of silence to suppress this knowledge, fearful that if that average pew-sitter learned the content of the real debate, his or her faith would be destroyed- and with it, more importantly, his or her support for institutional Christianity. 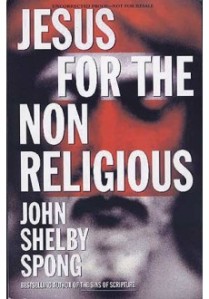 Bishop Spong really gets a one of the things that drives me towards ministry and Biblical scholarship. It drives me absolutely crazy that ministers go to seminary, and spend years getting MDivs and Doctorates and learning so much great theology and scholarship, and then when they get placed with a congregation, they bring almost none of it with them.

This has always been something that bugged me since I get back into church six years ago. As I studied and learned on my own, I always wondered why pastors never seemed to bring challenging, scholarly stuff in, stuff I knew they had learned and believed and trusted.

I resolved, when I felt a calling in my own life, that I would never fail to share what I learned in seminary with the congregants I serve. Even if it was uncomfortable and challenging and hard, even if it meant a church and I needed to part ways, I never want to sugarcoat or lie hold things back or lie. I never want to compromise my own belief and theology and faith for the sake of not making waves. If I believe that stuff I learn to be true, then I have an obligation to share it and stand up for it.

And it’s not just a hard-nosed or stubborn opinion of mine. I have too much respect for and trust in my future congregants, in their honesty and intelligence and good will, that I don’t want to lie to them, or take it easy on them. I want to challenge them, to make them think and disagree and debate, because that’s what I want, and that’s what people deserve. They deserve the truth, and they deserve to contemplate and accept or reject new ideas on their own, instead of at my discretion. They deserve a religious leader who will engage honestly and intellectually with them, no matter what.

That’s something I admire about Bishop Spong. And that’s why I really couldn’t agree more with his point here.

Tell Me What You Think Cancel reply